Portrait of the Author as a Young Word Lover

First on his pencil-written list was addax; later volumes brought him babirusa, chevrotain, dik-dik, echidna, fennec, galago. He opened each volume with the expectancy of a naturalist searching for new creatures in an unexplored land, and turned each page with his pencil ready to capture them — hyrax, pichiciego, quagga, tenrec, uakari.

The kid read comic books ravenously, and picked up lots of vocabulary from them. He learned "vivid" from a Little Lulu story. Lulu returns home late from school one afternoon and explains to her mother that on her walk home a witch lured her into a forest and made her sweep up every leaf on the ground. “What a vivid imagination you have,” her mother says, in the story's last frame.

The kid was a great natural speller, a talent that combined well with his fascination with words (and explains why, at the age of ten, he could spell pichiciego but not subtract 265 from 324). In the early grades at P.S. 206, he never got less than 100 on a spelling quiz. During one second-grade recess, while the girls were talking and the boys were punching each other, he was on the sidelines, spelling aloud to himself the words he was expecting on the day’s upcoming quiz. His secret to spelling was seeing the words, like a banner, across his closed eyes: l-i-t-t-l-e, t-h-r-o-u-g-h, v-a-c-a-t-i-o-n.

When the kid's neighbor moved away she threw out her married son’s 10-gallon fish tank and gave the nine-year-old kid his book, Exotic Aquarium Fishes, which had photos of just about every fresh water fish you could put in a home aquarium. The book opened up a whole new world of words for the kid because under each fish’s photo was not only its common name but also its scientific name: the black tetra was gymnocorymbus ternetzi; the angel fish was pterophyllum eimekei; the jewel fish was hemichromis bimaculatus. Wonderful words, and fun to say. And for the first time the kid became aware that words he knew were made from Latin and Greek elements: gymnasium, helicopter, hemisphere.

He can't recall a single literature lesson in high school, but he does remember his sophomore English teacher, Miss Hornung, asking her class to bring to school the next day ten words they thought had a beautiful sound. He still remembers three of his — azure, auburn and celestial.

The kid carried his love of words through high school and college, and soon he was standing before high school classes of his own. He enlightened and entertained his students by dissecting with them words like supercilious, auditorium and circumspect on the blackboard, then having them provide other words that used their prefixes, roots and suffixes. But as a new teacher, he mostly followed the traditional ways of teaching vocabulary — giving his classes word lists from the literature they were reading, having them make up sentences incorporating the words, and quizzing them, not realizing for several years that these were ineffective and unauthentic ways of enriching students’ vocabularies.

The kid read the dictionary. It was a bright idea for using his time wisely. Almost every night, when his baby daughter awoke between midnight and 2 a.m., he had been taking her from her crib, resting her head on his left shoulder and walking around the apartment, patting her back with his right hand until she stopped crying and he could gingerly put her down again, holding his breath as he tiptoed away from the crib. He tried getting some reading in along with the patting, but the next night he’d have to reread the unremembered paragraphs or pages from the night before.

One night, combining his baby-calming duties and his ambition to know more and more words, he sat down at the kitchen table, opened the Webster’s New World Collegiate Dictionary that had accompanied him through high school and college, and began to read it. Balancing the baby on his right shoulder and patting her with his left hand, he began listing in a spiral notebook the words he didn’t know, and their definitions, excluding technical or scientific words.

A few months later, the baby was sleeping through the night but the kid was still doing the dictionary thing, spending more and more time with the 1,600-page book, until, with great satisfaction, he wrote "zoanthropy." Along with eructate, sciamachy and gaberlunzie, it’s one of the hundreds of words from that list that he’s never seen again, or had occasion to use. But they were nevertheless fun to discover.

Except to regale his students with some of the more silly-sounding and obscure words from that list — propaedeutic, sudarium, tourbillion — the kid emphasized to them the importance of growing a vocabulary of useful words: words they would encounter in reading; words that would help them express themselves as they wrote and spoke and thought. He told them that every word is an idea, and that the more words you know, the better able you are to express yourself — even to yourself. Which didn’t mean, he told them, that words can't be both useful and fun to say — like salmagundi, lollygag, skullduggery, boondoggle, brouhaha, vicissitudes, tatterdemalion, phantasmagoric, punctilious, schlock, schmooze, teetotaler, verisimilitude, troglodyte, cockamamie, impecunious, peccadillo, pettifoggery, prelapsarian, sesquipedalian, truckle, grandiloquence, kerfuffle.

One day, beginning what he intended as a five-minute vocabulary lesson to open the period, the kid told his sophomore English class about how, at the age of 13, he had taken his bicycle out one Saturday morning and, without asking his parents’ permission — for he knew they would have never given it — he had gone from Brooklyn to the Staten Island Zoo via the ferry, years before the Verrazano Bridge was built. He told the class that his adventure was “surreptitious,” then asked them for a few examples of surrepitious things they had done. They told their stories for the rest of the period.

Personally referring a word to one’s experiences, the kid knew, was the best way to make a word stick, to make it one’s own word. He learned that in the third grade, when his teacher made “obnoxious” the kid’s own word. She had called him that for cracking jokes at the back of the room, obviously about what she was saying, and breaking up his classmates. And she followed that up by giving him a "U" in self-control on his report card. It happened in Hebrew school, too. That's where "shmendrick" became his own word when the rabbi called him that for entertaining his classmates with sacrilegious puns during the Chanukah show rehearsal. Schmendrick is somewhat synonymus with obnoxious, but more nuanced.

When the kid became the high school’s journalism teacher, he tried out and abandoned several textbooks before deciding that he'd give his class a new textbook every day, The New York Times. It was more timely than a conventional textbook; every aspect of journalism was there daily for the teaching; the writing was exemplary throughout the paper; and, most important of all, The Times would open up the world to these kids every day, as it did for him.

And then there were the words. The Times was so vocabulary rich that he made it the sole source of word learning in the journalism class, a place where he picked up new words himself all the time.

Every week his students collected words they had encountered in The Times, cutting out the passages containing the words, taping them onto index cards, and adding in pen their dictionary's definitions. No more than 10 words a week, he told them. Don't search for words; just read the paper and take words you want to know.

Among those handed in one week were cogent, xenophobia, desecration, venality, meticulous, adulation, truculent, attenuated, ostensibly and homilies.

Encouraged by their teacher to write and speak their newly-learned words when they felt comfortable with them, their vocabularies grew. He saw it in their writing assignments, in articles they wrote for the school newspaper, and in their conversation, sometimes for humorous effect just to show off a newly learned Times word. When Vicky Margolis returned to class the day after serving on a jury at an N.Y.U. Law School mock trial, and told him that the law student acting for the defense had been John F. Kennedy Jr., her teacher asked, “Is he really as good looking as they say?” Vicky responded with a word that the class had discussed from a Times article a few days before: “I was ogling him the whole time.”

It's reading and listening, the teacher had learned, not memorization and quizzes, that enriches vocabulary. Don't expect instant use; don't use a newly-learned word prematurely. When you see a word once, let it lie; you'll see it again and again. Then one day, without expecting to, you'll use it, in a letter, a conversation, an essay, an email. And then you know it's yours.

The kid's full-time teaching career has ended, but the tenets of his vocabulary teaching are the foundation of two books from which he hopes readers of all ages will learn words that will expand their speaking, writing and thinking vocabularies. As the philosopher Ludwig Wittgenstein wrote: "The limits of my language mean the limits of my world."

On one of the kid's last days as a high school teacher, he was gathering up books and papers in his empty classroom to go home when Emily Mott, one of those young people for whom words are living things, came in to tell him about an exciting new word she had encountered in The Times.

"Frisson," Emily said. She repeated it slowly, savoring the sound. "Frisson. I love that word. Gives me a shiver just saying it."

Emily's probably seen and heard frisson a hundred times since, in many places, and used it herself in conversation and writing. Which is more than the kid can say about the pichiciego, a tiny, pinkish South American armadillo whose name he encountered when he was seven. In case you're interested, it's pronounced pi chi see AY goh. Bring it up in conversation sometime. 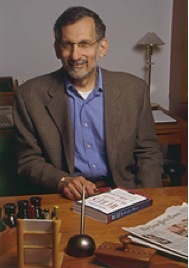