More Words That Make a Difference

Since its beginning, in 1857, the pages of The Atlantic Monthly magazine have welcomed the work of the nation’s and the world’s most accomplished writers and thinkers. From that bounty, spanning three centuries, Robert and Carol Greenman have created More Words That Make a Difference, a selection of more than 1,300 Atlantic passages, each of which features a word that should be a part of everyone's vocabulary. Presenting these words in the context of their original Atlantic passages, the Greenmans have created a work that elevates word books to a new level of usefulness and enjoyment.

The Atlantic Monthly was created by Ralph Waldo Emerson, Henry Wadsworth Longfellow, Oliver Wendell Holmes and others in 1857, mainly as a platform to speak out against slavery — one of its early editors led the first Union regiment of black soldiers in the Civil War. But its founders also intended it to be a place where American fiction, nonfiction and poetry could thrive and challenge the pre-eminence of British writing in nineteenth-century America’s minds and homes.

Robert and Carol Greenman chose the Atlantic to illustrate the use of words worth using because of the richness of its subject matter and vocabulary, the quality of its writing, and the magazine’s central place in American journalism and thought.

For more than a century and a half The Atlantic has chronicled, commented on, evaluated and affected American culture and thinking. It has dealt with all the major issues of American and world concern, and countless small ones, and has, arguably, had a greater influence on American thought and culture than any other magazine.

The passages in More Words That Make a Difference are exciting, provocative and scintillating. Their featured words were chosen for the way they add color, precision and life to speech and writing. Each passage illustrates and illuminates the use of a word so effectively that even if a word is completely new to you, you will instantly know how to use it. Show, don’t tell, is the journalist’s maxim that has guided the Greenmans in this respect. And what better way to show how words go about meaning what they mean than through the superb writing of the Atlantic Monthly.

Each featured word appears in the context of a humorous, inspiring, poignant or thought-provoking passage on history, literature, religion, politics, science, the arts, business, food and hundreds of other topics that appeared in The Atlantic.

No matter how extensive your vocabulary, you are bound to meet new words here that will prove invaluable aids to thinking and communicating. But you will also encounter many words with which you are familiar but rarely if ever think of employing, something these Atlantic passages will spur you to do.

Teachers, from elementary school through college, are finding More Words That Make a Difference a rich classroom resource, not just for vocabulary enhancement but because hundreds of its passages provide perfect prompts for writing and discussion.

An additional feature are the fascinating language notes that follow more than a hundred of the passages — a word history, a linguistic sidelight, a personal comment.

More Words That Make a Difference ($24) is available only from Levenger, a catalogue and Web site company devoted to products for people for whom reading and writing are an important part of life. Levenger has stores in Boston, Chicago, Boca Raton, and Tyson’s Corner, Virginia.

"Read a few excerpts and discover the magic in words. A wonderful compilation from the Greenmans, and a great book for personal enrichment or for your students."
— Logan Aimone, Executive Director, the National Scholastic Press Association


For selections from More Words That Make a Difference, go to Selections. 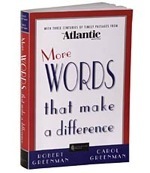